Group Managed Service Accounts (gMSA’s) can be used to run Windows services over multiple servers within the Windows domain.

Since the launch of Windows Server 2012 R2, gMSA has been the recommended service account option for AD FS. As abusing AD FS is one of my favourite hobbies, I wanted to learn how gMSAs work.

According to Microsoft’s documentation, there are multiple options for running services:

If we want to run Windows service on multiple servers using the same managed account, we need to use gMSA. One of these kind of services is Active Directory Federation Services (AD FS).

As I’m using AD FS here as an example, I configured AD FS to use gMSA account. I named the account to AADINTERNALS\gmsaADFS$ 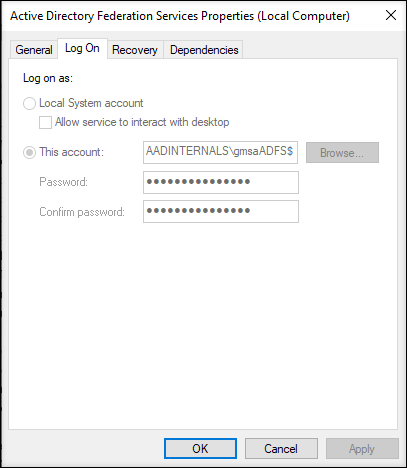 The account can be located in AD under Managed Service Accounts 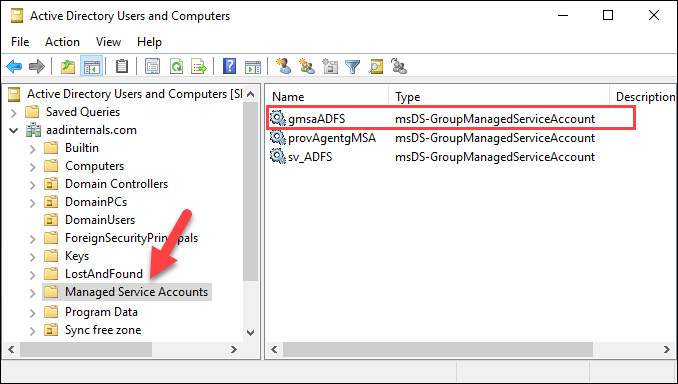 While googling around, I ended up to The Hacker Recipes’s ReadGMSAPassword site.

It turned out that the password blob is stored in msDS-ManagedPassword attribute of the gMSA account. However, running the command as a Domain Admin didn’t return the password:

It turned out that only those principals who are listed in PrincipalsAllowedToRetrieveManagedPassword property of the gMSA can retrieve the password. So the next step was to find out who those principals are:

Quick query to AD showed that the principal in question is the computer account of AD FS server:

To get the system permissions, I launched the PowerShell as a system using Sysinternals’ PsExec:

Next step was to figure out what to do with the password blob. Both blogs I mentioned earlier used Michael Grafnetter’s excellent DSInternals tool for this.

DSInternals includes a command ConvertFrom-ADManagedPasswordBlob which is able to parse the password blob.

As I mentioned earlier, if a computer needs to run a service as gMSA, it needs the password. The computer can fetch the password from AD, but what if the AD is unavailable?

The service must be able to start without contacting the domain controller, so the password must be stored locally somewhere..

In one of my previous blogs on ADSync passwords, I noticed that service account passwords were stored in registry at:

As such, I was able dump the passwords with AADInternals (requires local admin rights):

Could this password actually be the same blob that is stored to AD? Let’s find out!

Unfortunately, I got an error message related to blob length.

Luckily, comparison of the blobs revealed that the LSASS blob had the same content but also zero padding at the end 😊 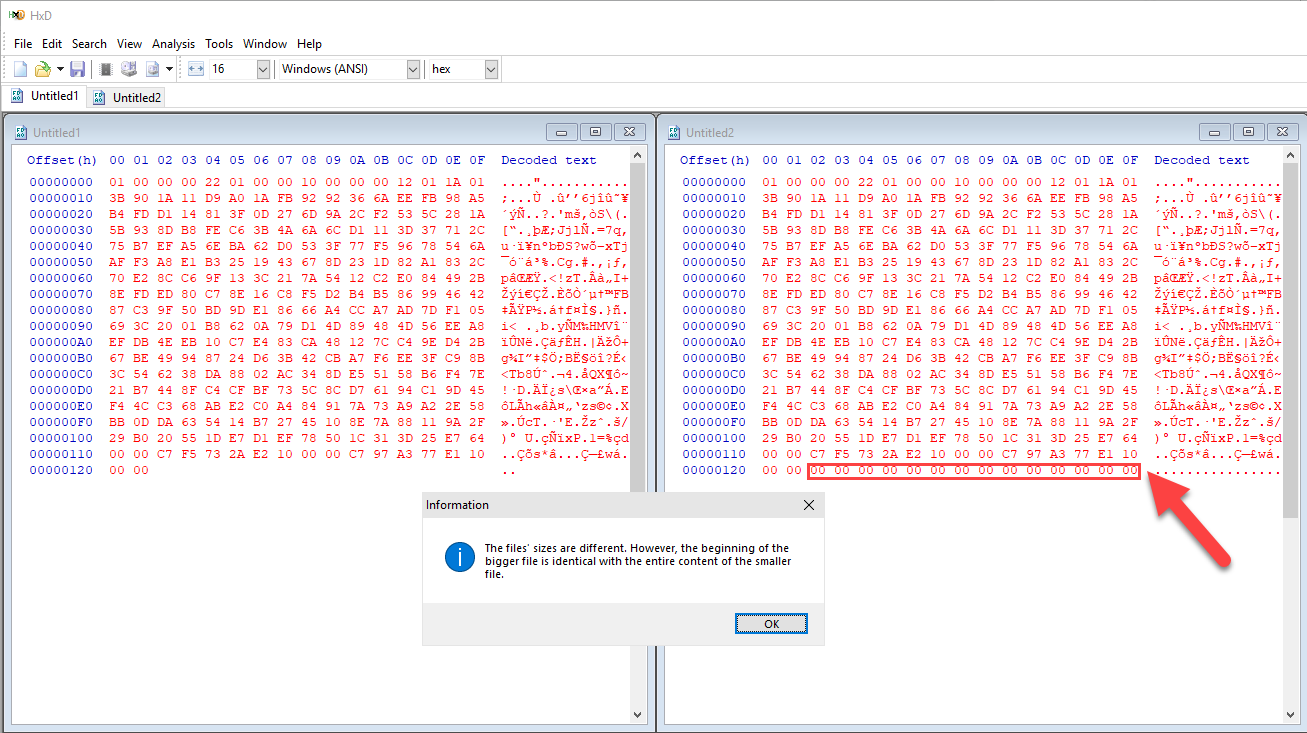 Another try with the truncated blob confirmed that the content of the blobs are indeed identical:

If you’re running just one service using gMSA, locating the password is easy. But what about if you have multiple services using gMSAs, which of the secrets is correct?

Cracking this secret took a while, so bear with me 🙏

First, it seems that the all gMSA account names start with the same prefix:

Unfortunately, he stated the same than I had already noticed:

Note, however, that the NAME of the gMSA (unlike the MSA) doesn’t appear to be stored in plaintext in the secret. It is, presumably, recoverable – however, I don’t have information on how to do so currently. This – in theory – makes it a little more difficult for an attacker, since unlike an MSA, where the account name is clearly part of the local secret key, you don’t have that information here.

But now that we know the gMSA account prefix is constant, I had something to start with.

I decided to find out how Windows locates the correct gMSA password when starting the service.

I started this journey by running Sysinternals’ Strings against all dll files under System32:

Only hit was in netlogon.dll. There was also an interesting function named NetpGetSecretName which I decided to study further! 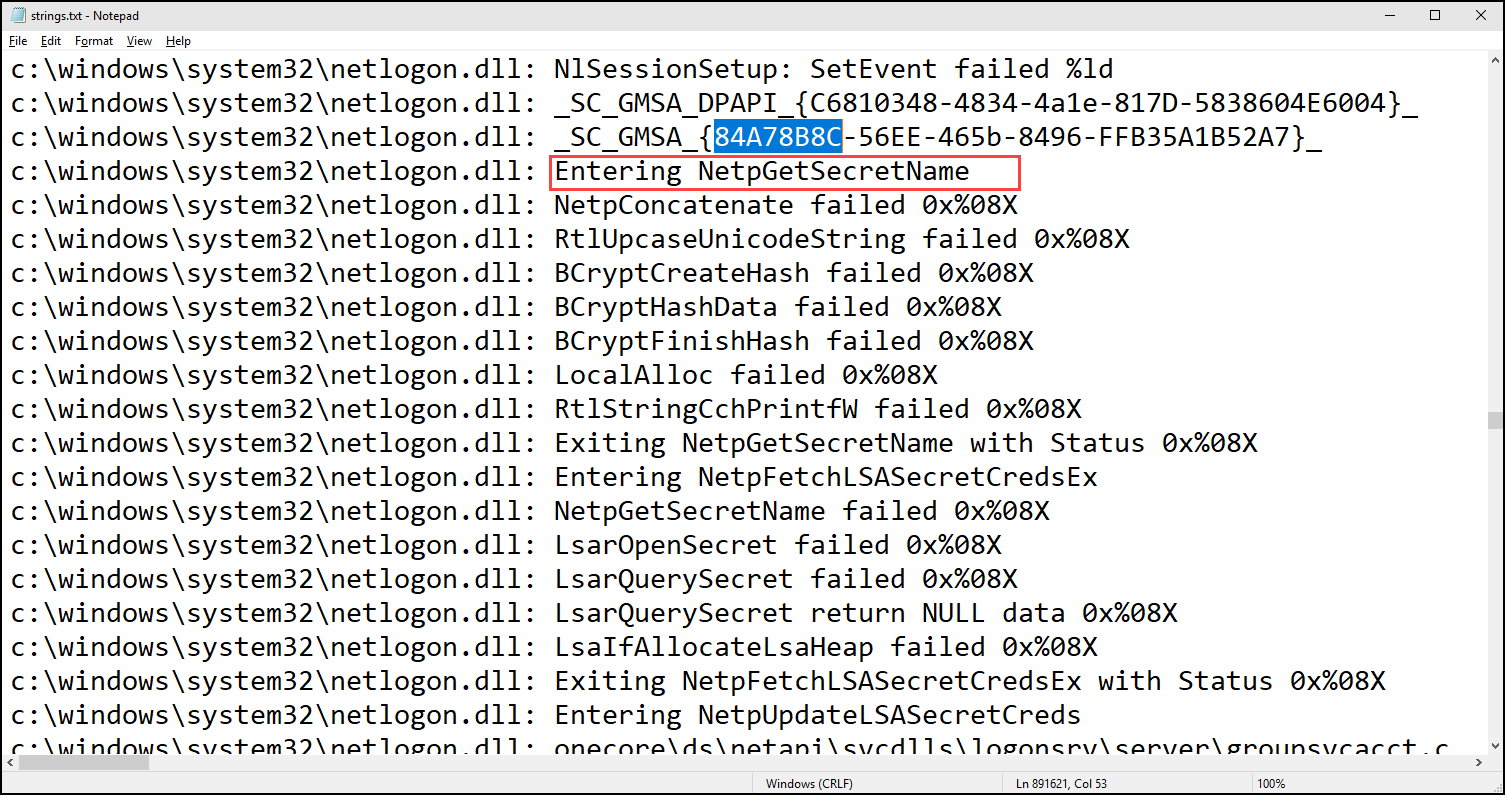 So, time to open Ghidra and start to work! First, I located the function in question by searching the gMSA prefix and started to rename parameters and functions as I learned how the function worked.

1: The prefix is chosen based on the type:

2: The domain name and account name are concatenated without any delimiters.

3: The concatenated name is made upper case. 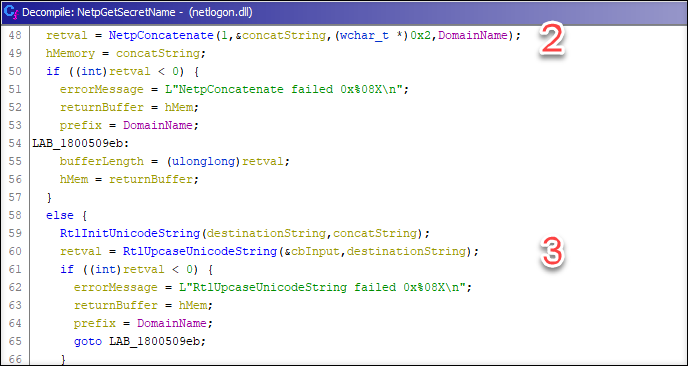 Then to the beef!

5: The upper case concatenated account name pbInput is send to the hash object. (Ghidra did not decompile the file correctly, so some variable assignments etc. seem to be missing.)

6: The hash is finalized and saved the pbOutput. 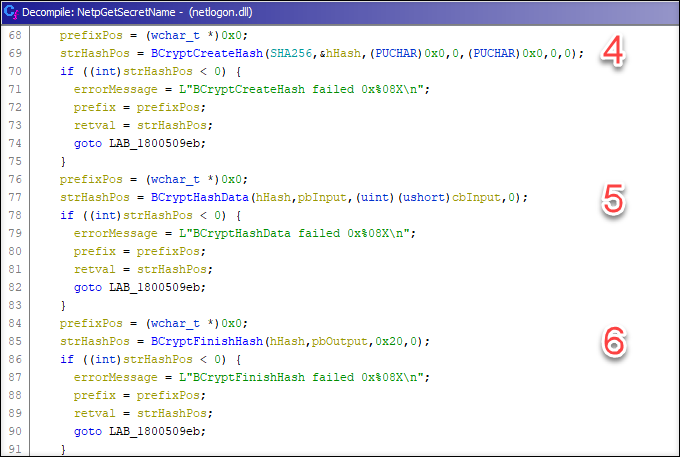 7: There is an interesting do-while loop that seems to creating a hex string from the hash. However, high and low bits of each byte are switched.. 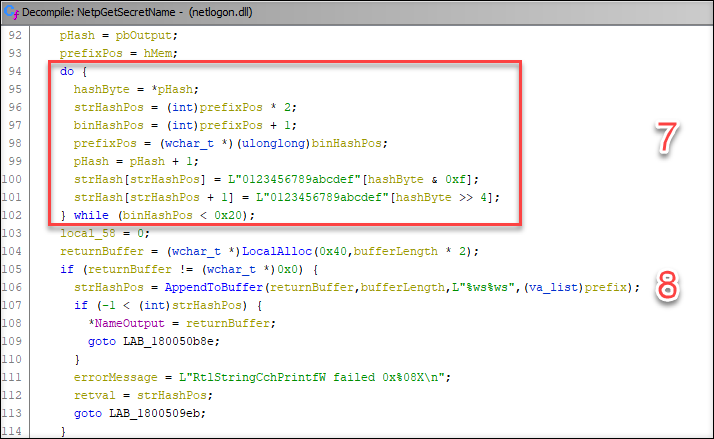 Now that I knew how the gMSA name was derived, I was ready to implement it in PowerShell!

Unfortunately, the output was what I was expecting:

I assumed that there was something different with the implementation of SHA256 between PowerShell and BCrypt.dll that the netlogon.dll was using.

So, I implement a C# console program that used native BCrypt.dll methods directly.

Still no luck (output bytes are not reversed, but we can see the hash is incorrect):

I spent a lot of time trying to figure out what was wrong. I even installed x64dbg for the first time of my life 😬

So, I attached the debugger to lsass.exe, searched the correct call to BCryptFinishHash, and set the breakpoint.

Running the following PowerShell command will hit the NetpGetSecretName function. 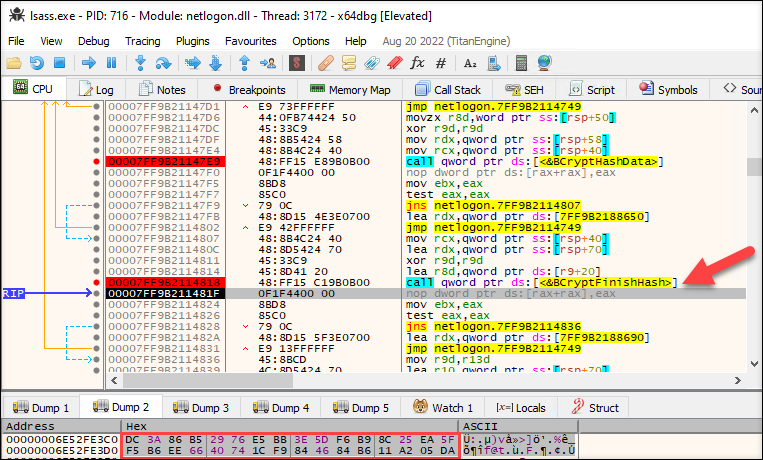 At this point, it took a lot of time to make sure the hashing was implemented correctly - as it was.

If the implementation was correct, then the problem had to be somewhere else.

While reviewing the code once again, I noticed that the SHA256 hash algorithm was not initialized in NetpGetSecretName function. So, it must have been initialized somewhere else.

With Ghidra, it was quite easy to find the correct function where the SHA256 was initialized: NlInitializeCNG 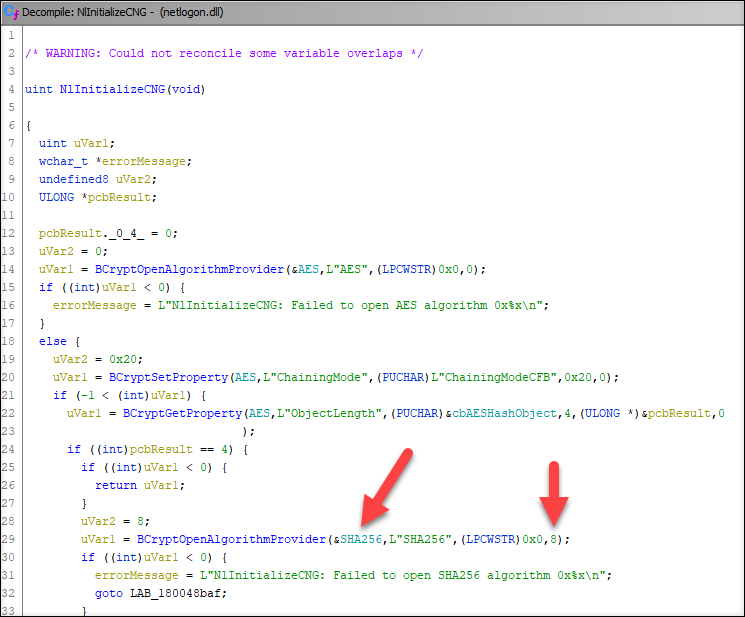 The NlInitializeCNG function provided a flag (8 = BCRYPT_ALG_HANDLE_HMAC_FLAG) to BCryptOpenAlgorithmProvider function which my code did not. According to the documentation:

And now the (non-reversed) output hash was correct!

So, Microsoft initializes the SHA256 as HMAC, but does not provide HMAC key (i.e. password) when calling BCryptCreateHash function 🤷‍♂️

Based on what I learned about gMSAs, I was able to implement new and update existing gMSA related functionality of AADInternals.

Here’s a sneak peek what to expect:

The new gMSA functionality will be included in the next version. I’ll update the blog with details after it’s released (hopefully soon)!